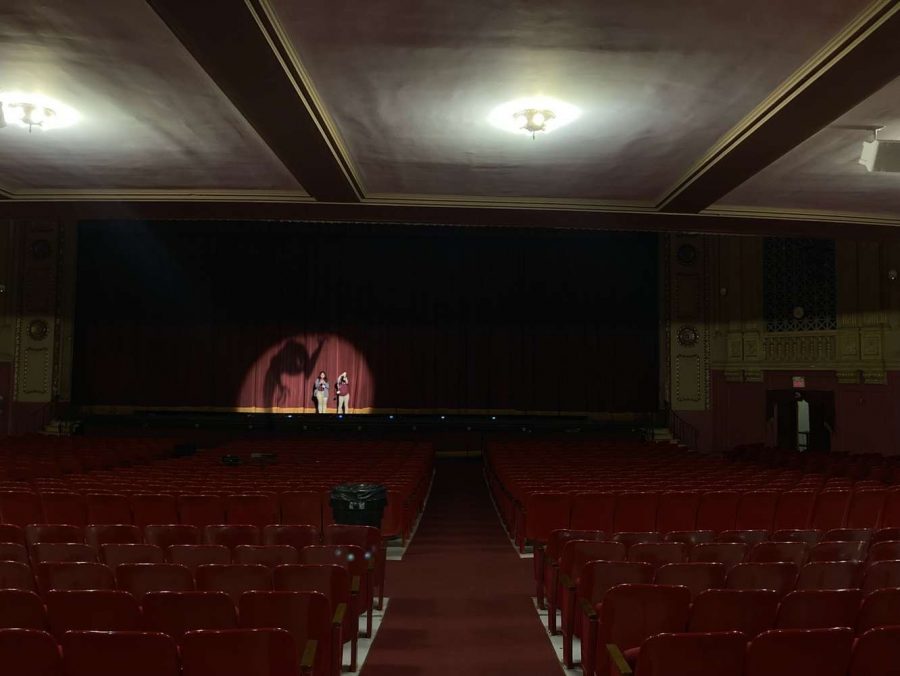 Is that a ghost leering over the SHARK "Insidious" movie emcees?

The horror movie night was held at the auditorium on October 29th. It was hosted by Morton East SHARK Club. The movie started at 6:00 p.m and it ended around 8:30 p.m. Food like pizza, popcorn, and pop where being sold at the entrance. The movie that was shown was Insidious, a 2010 PG-13 horror film. More than 150 people attended the event, including students and their family/friends. In a recent random survey of 108 Morton East students, 68 said that they were willing to attend another movie night hosted by SHARK club and only 40 students said no.

“I helped out because it seemed fun to do and you know why not help out to raise funds for little perritos. I do not know what I would improve because overall it was great for me. Maybe change the food because I know people were complaining about the pizza and the pricing, so maybe lower the price of the pizza. I liked the movie because I had never seen it, so it made it even better. Especially because the lights were out, and it felt like an authentic bootleg AMC theater, but it was still nice to be in. So, I just enjoyed the movie, that and because it was just fun to help. It was going to be something to remember Highschool memories,” said senior Angel Padilla, one of the 12 members of SHARK Club that helped at the event.

As you can see many people enjoyed helping because of the cause. Others like Mitzi enjoyed it because of her friends and the way the theater made the movie seem better.

Many enjoyed the movie night that was hosted, and people were asking about another movie night being held any time soon.

“So, it was our must successful movie night ever- we made over $750! The money goes towards Animal for Awareness, a local nonprofit that rehabilitates and cares for abandoned, orphaned, and injured wildlife as well as victims of the exotic pet trade. We also use the money to buy treats and supplies to dog and cat toys for shelter animals. We are thinking about doing a holiday themed movie in December (think Home Alone, A Christmas Story). Stay tuned,” the SHARK club sponsor Ms. Berezniak  said.

This was a perfect time for SHARK club to host horror movie night because there have been serval stories where people say that the Chodl is hunted. Not only did it make the event spookier, but it made the whole experience better.

“I used to get really freaked out running through the stairs by 380, on my way to the auditorium, and maybe it’s just because the stairs are a bit lonely, but it would feel cold like something was there,” Ms. Judge, an english teacher said.

For the club to host the movie in the Chodl they had to follow a few rules and regulations to host the event.

“In terms of reserving the auditorium, any club or group can do so. The club sponsor contacts the principal’s secretary and if it isn’t already being used, they can use it. Sometimes, I help the teacher running the event organize some equipment and instruct them on how the lights work,” Mr. Lubinus, a theatre teacher said.

Now, that you have read this article, would you be willing to attend another movie night?