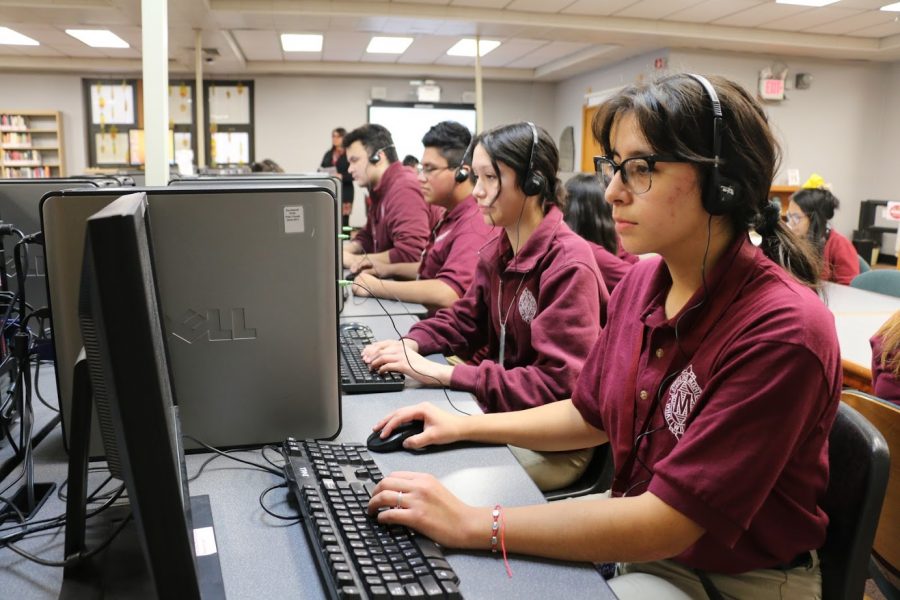 Morton East students take a test to determine whether they will earn a commendation or Seal of Biliteracy.

499 Morton East students earned awards from the State of Illinois in biliteracy this past year:  243 students received the top honor — Seal of Biliteracy, and 196 earned the Commendation toward Biliteracy.

The Illinois State Seal of Biliteracy is the ability to read AND write in two languages. Biliteracy has knowledge and skill to read and write in one’s home language and in a second language. The reason for implementing the Seal of Biliteracy is to encourage students to study languages and cultures. Some benefits for biliteracy are that the students can stay on task more easily, students are more perceptive and observant, they have better problem-solving skills; they make more rational decisions and increased their working capacity. Also, the Seal of Biliteracy is an award given by a school, district, or state in recognition of students who have studied and attained proficiency in two or more languages by high school graduation. In a random survey of 138 Morton East students, 116 students reported “yes” on speaking AND writing in Spanish and 22 students said “no.”

“The seal of biliteracy is for everyone who speaks two languages, any seniors have the opportunity to take it. The biliteracy test started in 2015 at Morton East and West, it was part of the state program” said Ms.Keppler.

Many students at Morton East High school took the biliteracy test and have opinions as to how is the test and how important is to take the test.

“I took the biliteracy and I thought it was easy, I only took the Spanish portion because my SAT scores were good.  The only part I struggled was with the audio” said senior Miriam Jimenez.

There are multiple benefits when it comes to taking the biliteracy test, it can help students when applying to colleges for.

“Taking the biliteracy can boost your college applications when they see the seal in your diploma, they also see how you are bilingual,” said college coordinator Ms. Avila.

Students are planning on taking the biliteracy test in the near future.

“I am planning to take the biliteracy test next year, I have some senior friends who have told me that I should take it because it can help me in the future when I apply to colleges,” said junior Bianca.

Students can choose a school day or Saturday to take the biliteracy test.

“My friends told me the test is not hard, so I plan on taking the test on March because I find it very important to take because colleges see if you took the test,” said senior Maria Placencia.